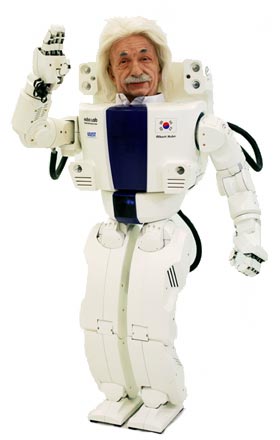 The Personality Forge has teamed up with Hanson Robotics to provide the artificial intelligence personality for a walking, talking, expressive android with the likeness and personality of Albert Einstein. The new Personality Forge: Robotics Edition resides onboard the robot, which is capable of voice recognition, spoken responses,face recognition, and emotional expression. The robot is aware of its environment and able to move about independently. This is an incredibly exciting and ambitious project, pushing the boundaries of artificial intelligence and robotics.

The Einstein robot will be appearing at the Wired NextFest this year, from September 29th - October 1st in New York. The robot will be at the Hanson Robotics exhibition, called "Humanlike Conversational Robots".

The Personality Forge's AI Engine is a highly sophisticated artificial intelligence system that combines both of the leading and meaning of each word, the relationship between the words, and the overall structure of the sentence. The personalities then draw from a huge bank of flexible search algorithms including situational, emotional, and personal information to determine the best response. The Personality Forge's AI Engine features long-term personal memories, emotional comprehension and expression, a robust spell-correction system, and built-in knowledge of over 150,000 words and their conceptual relationship to each other.